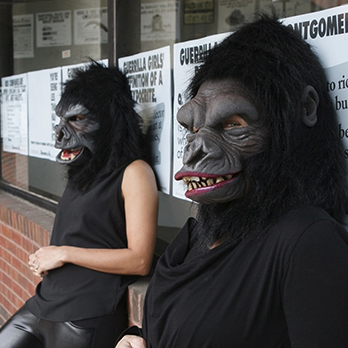 The Guerrilla Girls are a bunch of anonymous females who take the names of dead women artists as pseudonyms and appear in public wearing gorilla masks. They have produced posters, stickers, books, printed projects, and actions that expose sexism and racism in politics, the art world, film and the culture at large. They use humor to convey information, provoke discussion, and show that feminists can be funny.

They wear gorilla masks to focus on the issues rather than their personalities. Dubbing themselves the conscience of culture, they declare themselves feminist counterparts to the mostly male tradition of anonymous do-gooders like Robin Hood, Batman, and the Lone Ranger.

Their work has also appeared in The New York Times, The Nation, Bitch and Bust; on TV and radio, including NPR,, the BBC and CBC; and in countless art and feminist texts. The mystery surrounding their identities has attracted attention. “We could be anyone; we are everywhere.”