Who Does She Think She Is?

"In the movie, "Who Does She Think She Is?" we see every mother's internal conflict about answering the call to self-expression." 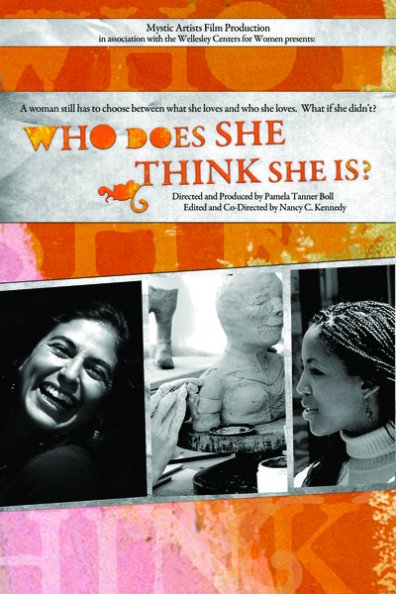 I recently saw the movie, "Who Does She Think She Is?." It is from the same producing team that won an Academy Award for "Born Into Brothels," which is one of my favorite documentaries and also highly worth seeing. The film was recommended to me by a friend and regular contributor to Hip Slope Mama, Bethany Rule Vedder, who is a Park Slope mom, life/parenting coach and the creator of SaneMoms.com. "Who Does She Think She Is?" examines some of the most pressing issues of our time: parenting and work, partnering and independence, economics and art. It follows five women artists (mothers) as they navigate the economic, psychological, and spiritual challenges of making work outside the elite art world.

The film really spoke to a core restlessness I have been feeling since I left corporate America to become a stay at home mom. My dream had always been to live a life full of creativity. I imagined myself getting old in New Mexico, with one long, loose grey braid swaying down my back. I would be surrounded by the sumptuous sculptures and paintings I had birthed throughout the years.

I went to Bennington College on a half scholarship to study painting in the eighties. Painting was one of the things I could actually claim as an accidental and innate talent. Everyone pursues creative expression for different reasons. For me, it became a way to fit in. People actually liked my paintings. It was something I knew I was good at so it helped my ego blossom at a time when it desperately needed to. After I left college, I never felt like I had the energy or the courage to commit to an emerging artist's lifestyle of living on the fringe. I was too practical and obsessed with security to try my hand at it. The possibility of my craft turning into something profitable was always diminished by profound fear. That is, fear that I'd end up on a permanent diet of Top Ramen, while living in Alphabet City (which was not so hot in the early 90's). It was very black and white for me. It was a choice of either gambling on a life of passion that would probably end with me as a bag lady or choosing the promise of a growing, steady paycheck that only corporate America could provide (at least in my mind).

Now as a new mom, my plans have shifted. This time away from corporate America coupled with the very act of giving birth put me in touch with that primal urge to create art again. However, as this film points out, the struggle to create art while nurturing life is not so easy. How did I so severely underestimate how unmanageable it would be to dedicate time to art/creativity with a new family? In the movie, "Who Does She Think She Is?" we see every mother's internal conflict about answering the call to self-expression. The film makes a clear point that most of the outstanding women figures in history, such as Amelia Earhart, Georgia O'Keefe, Janis Joplin and Edith Wharton did not have kids. Many women feel like they are being selfish when they take time away from their families to write a book or paint or act. Many could conclude that the very act of pursuing self-fulfillment through art is much easier as a single women then as a married one with children. The truth is, even a single women could forfeit a creative life to tend to other important commitments, like a sustainable career. And yet, if you are naturally creative, to sublimate that urge is too die a slow death and risk not becoming whole. This movie really helped me connect to that lost artistic soul in me. In finding it again, I hope to slowly nudge it back into consciousness. This will be the best gift I can give myself and my family.

Melissa Lopata is the Founding Editor of Hip Slope Mama.

This article was originally published on Hip Slope Mama: