Who Does She Think She Is? in Ethiopia 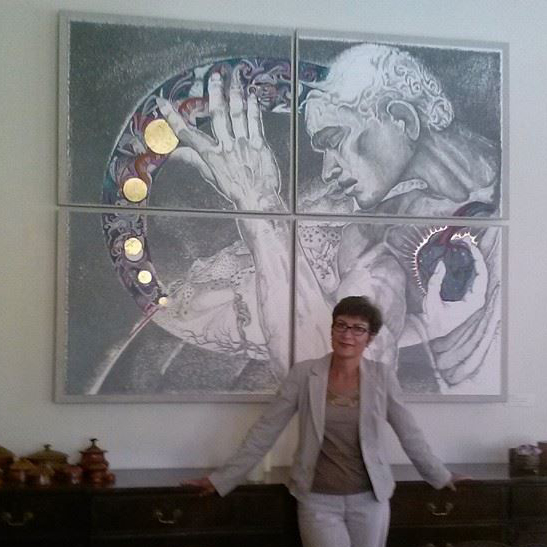 Last night I received an email from Patricia Haslach, the US Ambassador to Ethiopia. She told me that Who Does She Think She Is? played at the embassy to about sixty people and that the response was overwhelming. There were many women artists from Ethiopia in the audience and they identified strongly with our stories.  There was talk of putting the film on Ethiopian public television as well as getting it to the UN.

Maye Torres was at the event. In fact, the State Department has brought her to Ethiopia for a week to conduct workshops and seminars with local artists. And one of her large works on paper was bought by the State Department and hangs in the Embassy dining room (see photo with Ambassador Haslach)!  You may recognize this piece of art as the one Maye is working on in the opening scenes of Who Does She Think She Is?

It is humbling to think that this film–which came out of my own experiences as a mother and a painter–continues to have such a positive impact on people–not only in the States, but also around the world.

Who Does She Think She Is? came out of my self doubt, confusion, anger and heaps of love for both my work and my children–I wanted to see how other women handled these challenges. And what amazing women we found!

The fact that six years after the film was released in New York City and that it continues to find new audiences is a testament to the hard work of each of these powerful women as well as to the wonderful team that I worked with to make this movie.

I am truly grateful to have had the privilege of telling the stories of these strong and creative women.

But, the other lesson here is — persist. I felt this was an important story and yet initially it was hard to convince others.  Although we ended up winning many awards at film festivals, the initial submissions were rejected. At one point I needed a new Editor and talked with six professionals who essentially told me that they didn’t see a story here. But Nancy C. Kennedy disagreed.

The story of getting this film out to the world is one of setbacks and disappointment and stubbornness. Stubbornness and the belief that it was worth doing and worth finding the right people to make it happen. A great, great life lesson.