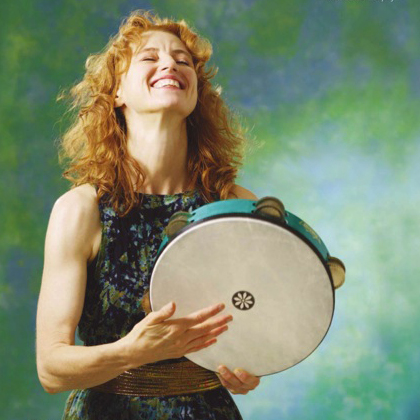 The February issue of DRUM! Magazine listed Layne Redmond as one of the "53 Heavyweight Drummers Who Made a Difference in the 90's." She's the only woman on this list that includes Tony Williams, Roy Haynes, Zakir Hussain, Elvin Jones and Micky Hart, and the only drummer on that list whose work is focused on the spiritual and healing aspects of drumming. Layne Redmond’s unusual path focuses on the hand-held frame drum, the world’s oldest known drum. For fifteen years, she researched the history of this drum in religious and healing rites in the ancient Mediterranean world culminating in her book, When The Drummers Were Women. This book details a lost history of a time when women were the primary percussionists in the ancient world and also explains why they are not today.

Layne has been featured in many music festivals including the Touch Festival in Berlin, Seattle Bumbershoot Festival, the Institute for Contemporary Art in London, Tambores do Mundo in San Luis, Brazil, as a soloist at the World Wide Percussion Festival in Salvador, Brazil. In Feb. 2002 Redmond’s percussion duo performed at the Vienna International Percussion Festival and in 2006 her group, Sundarhalahari, performed at the UFBA Percussion Festival in Salvador, Brazil. In the spring of 2007 she presented and performed at the Univ. of Florida’s Health and Spirituality Program and at Stanford University. In April she taught and performed at the Marranzano World Festival a traditional tambourine festival in Sicily . Her recordings include: The Wave of Bliss, Invoking the Muse, Trance Union, Since the Beginning and she has two instructional videos: Rhythmic Wisdom and A Sense of Time. Her meditation cds include: Chakra Breathing Meditation, Chanting the Chakras, Heart Chakra Meditations and her book Chakra Meditation. She was the first woman to have a Signature Series of world percussion instruments with Remo, Inc. All Things Considered on National Public Radio, the New York Times, the Philadelphia Inquirer, Drum!, Modern Drummer, Percussive Notes, New Age Journal, Harper’s Bazaar, New Age Voice and Shaman’s Drum are a few of the media that have featured articles and interviews with Layne Redmond. Layne is a master clinician and has presented at the Percussive Arts Society's International Convention,the National Association of Music Therapy and in 1998 she gave the keynote lecture and performance at the Healing Sound Colloquium. Some of the venues she's taught or performed at are Vassar College, William's College, Bucknell College, Hartford Seminary, Andover Newton Theological Institute, Berklee School of Music, Univ. of North Fla., Penn State, S.U.N.Y., The Knitting Factory, Esalen, Omega, Mt. Madonna and Kripalu Yoga Center. Nov. 2006, she and Karen Hopenwasser, MD presented, Therapeutic Rhythmic Techniques at the International Society for the Study of Dissociation.