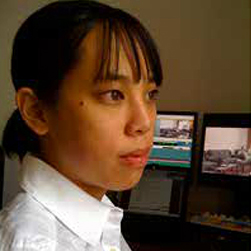 Michelle currently works as a freelance assistant editor on independent documentary films in New York City, where she has lived for 10 years. Current projects include Camp Victory, Afghanistan, a verite film directed by Carol Dysinger following American National Guard troops training to fight the Afghan National Army. Before pursuing a career in editing, Michelle worked as an Associate Producer for television newsmagazines like 20/20 and Primetime as well as reality TV shows which she won’t list here but will share horror stories if prompted. She holds a Master’s Degree in Media Studies from The New School in New York City as well as a B.A. in English from Oberlin College in Ohio.