Who Does She Think She Is?

“All of the women featured in this film are particularly impressive in their strength and determination to keep their art at the forefront of their life, despite the personal risks and in some cases the devastating fallout, particularly for their relationships.”

I was lucky enough to be sent a preview screener for the US doco I mentioned in my previous post, Who Does She Think She Is?, and I can tell you I pretty much sobbed my whole way through it. I found it incredibly moving—saddening, inspiring, galvanizing all at once.

All of the women featured in this film are particularly impressive in their strength and determination to keep their art at the forefront of their life, despite the personal risks and in some cases the devastating fallout, particularly for their relationships.

It brought to mind writer Brenda Walker’s comment in The Divided Heart that in trying to be artist, mother, worker and wife, something had to give—and it wasn’t going to be her child, her writing or her job (which she needed to pay the mortgage)...

In the documentary, some husbands were generous supporters of their partner’s work. Others wanted a wife, in the traditional sense, and were threatened by their partner’s creative success, or the way it took her away from the family. As one of those featured suggests, as a woman art takes you to places that are not safe. 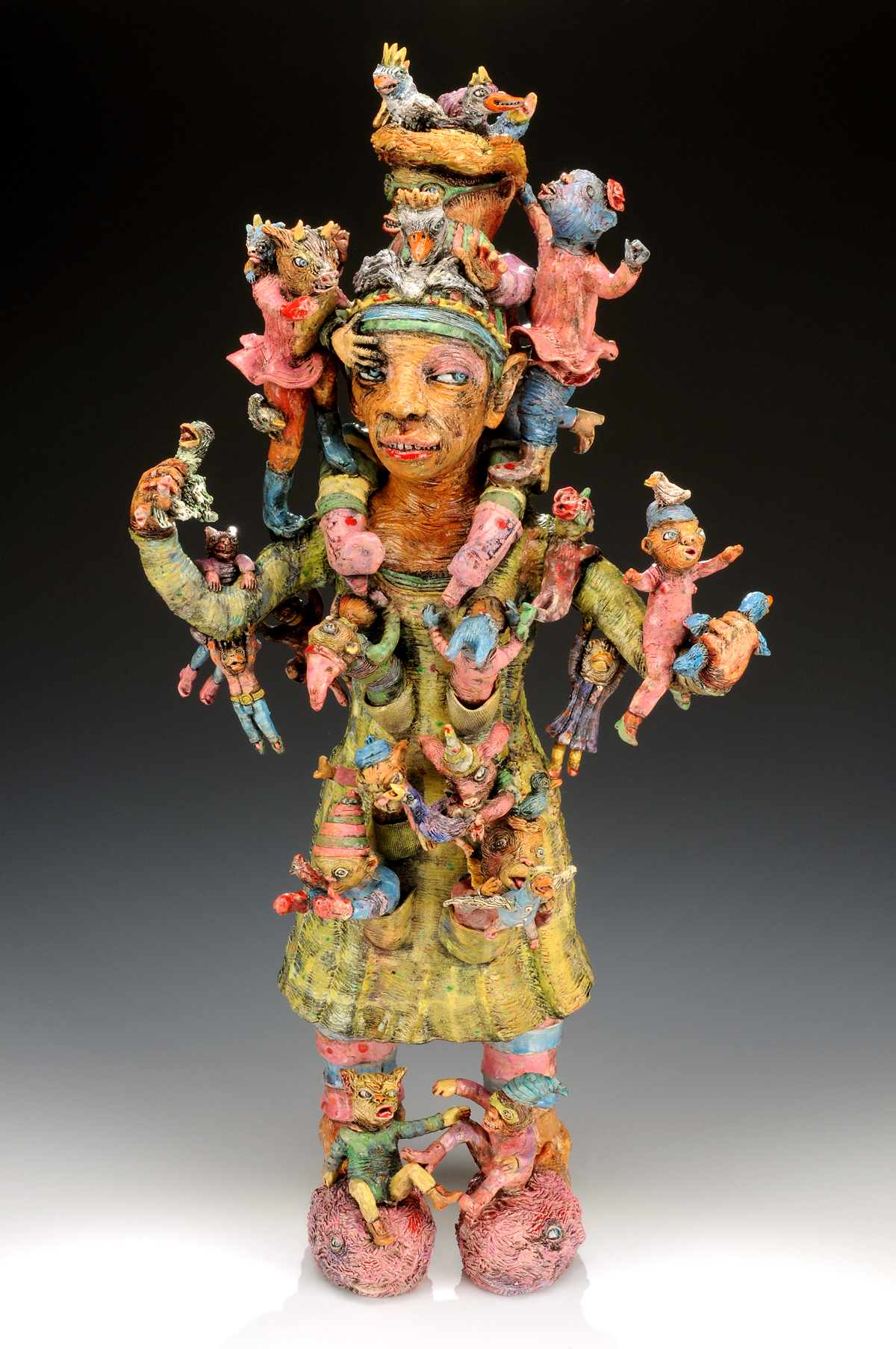 I was particularly taken with the work of sculptor Janis Wunderlich. On the surface, her life is one of domestic normality—a Mormon with five children and a husband—yet she manages to have between 10 and 15 shows a year. Her phenomenal sculptures show women beset by mischievous creatures with rabbit ears clambering across her body, or sometimes birthing one child as others hang from her arms and shoulders. She puts her stress and conflict into her work, she says, so that she can stay sane in her day-to-day life. Her work is done in such a frenzy (placed in galleries before it gets broken around the house!) there isn’t time to look back and assess her work before moving onto the next thing.

She is a great example of the way motherhood allows women to avoid the trappings and vagaries of the art market—or at least the ‘art scene'. Here are women making art on the kitchen table while the kids nap or draw at the table beside them. Beyond the need to make a living, these women remind us of what the artistic imperative is really about—an unstoppable force that must be heeded or, as one said, “I go crazy”.

That said, they also continue to suffer for this, with statistics showing that women still don’t command equivalent prices to their male counterparts and represent a tiny percentage of solo shows in America’s major galleries.

Perhaps the most powerful story here is that of Máye Torres, who decided she and her three kids could live on US$24,000 a year if she lived as self-sufficiently as possible. Her struggle to be both mother and artist has meant guilt, divorce and a struggle to be taken seriously. But her incredibly articulate and caring children are a great testament to her; their recognition of her needs as an artist and their pride, admiration and respect for her almost brought me undone.

I read a scathing review of this film in Time Out New York recently, which accused it of encapsulating “everything that gives feminism a bad name, from whining about patriarchal society to celebrating the goddess within”. Isn’t it fascinating the way some women react so vehemently against this theme, offended that artists-mothers might have the audacity to make a special case of their situation? Anyway, rather than repeat myself, you can check out my response here.

As I said in my Time Out rave, clearly we as a culture still have a long way to go in understanding what can often be subtle, almost indefinable barriers for contemporary women artists—their own fear that their creative compulsions make them ‘bad’ mothers being one of the most powerful and complex. And as this film shows, artist-mothers’ stories are a great way into some of the big questions we all face about how we live and what we choose to value in life.

This article was originally published on Rachel Papers:
http://rachel-power.blogspot.com/2008/12/who-does-she-think-she-is.html