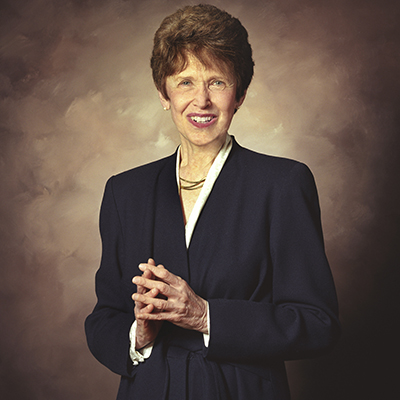 Riane Eisler is an eminent social scientist, attorney, and social activist best known as author of the international bestseller The Chalice and The Blade: Our History, Our Future, now in 22 languages, including most European languages and Chinese, Russian, Korean, Hebrew, Japanese, and Arabic.

Her newest book, The Real Wealth of Nations: Creating a Caring Economics –  hailed by Archbishop Desmond Tutu as “a template for the better world we have been so urgently seeking,” by Peter Senge as “desperately needed,” by Gloria Steinem as “revolutionary,”and by Jane Goodall as “a call for action” – proposes a new approach to economics that gives visibility and value to the most essential human work: the work of caring for people and planet.

Dr. Eisler is sought after to keynote conferences worldwide, and is a consultant to business and government on applications of the partnership model introduced in her work. International venues have included Germany at the invitation of Prof. Rita Suessmuth, President of the Bundestag (the German Parliament) and Daniel Goeudevert (Chair of Volkswagen International); Colombia, invited by the Mayor of Bogota; and the Czech Republic, invited by Vaclav Havel (President of the Czech Republic).

Her other books include the award-winning The Power of Partnership and Tomorrow’s Children, as well as Sacred Pleasure, a daring reexamination of sexuality and spirituality, and Women, Men, and the Global Quality of Life, which statistically documents the key role of the status of women in a nation’s general quality of life.

Riane Eisler was born in Vienna, fled from the Nazis with her parents to Cuba, and later emigrated to the United States.  She obtained degrees in sociology and law from the University of California, taught pioneering classes on women and the law at UCLA, and is a founding member of the General Evolution Research Group (GERG), a fellow of the World Academy of Art and Science and World Business Academy, and a commissioner of the World Commission on Global Consciousness and Spirituality, along with the Dalai Lama, Archbishop Desmond Tutu, and other spiritual leaders. She is also co-founder of the Spiritual Alliance to Stop Intimate Violence (SAIV),  www.saiv.net. She is president of the Center for Partnership Studies, www.partnershipway.org., dedicated to research and education.

Her pioneering work in human rights expanded the focus of international organizations to include the rights of women and children. Her research on systemic cultural transformation has impacted many fields, including history, sociology, economics, psychology, and education. She is the author of over 200 essays and articles in publications ranging from Behavioral Science, Futures,  Political Psychology,  and The UNESCO Courier to Brain and Mind, Yes!, the Human Rights Quarterly, The International Journal of Women's Studies, and the World Encyclopedia of Peace.

Dr. Eisler has received many honors, including the Humanist Pioneer award and the first Alice Paul ERA award.  She is the only woman among twenty great thinkers including Hegel, Adam Smith, Marx, and Toynbee selected for inclusion in Macrohistory and Macrohistorians in recognition of the lasting importance of her work as a cultural historian and evolutionary theorist.